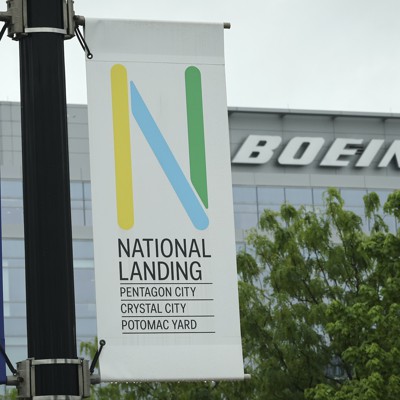 Lost in Boeing’s announcement that it would move its corporate headquarters from Chicago to the Washington area is the company’s decision to “develop a research & technology hub in the area to harness and attract engineering and technical capabilities.”

Given the competition for engineers within aerospace and defense, commercial tech, and a bunch of other sectors, it’s not unusual for companies to stand up potential feeders like this.

“The hub will focus on developing innovations in the areas of cyber security, autonomous operations, quantum sciences, and software and systems engineering,” Boeing said.

The competition for science and engineering talent in Northern Virginia, a region with a significant tech corridor, has been on the rise in recent years. Amazon’s 2018 decision to open a second headquarters, dubbed HQ2, in the same Arlington neighborhood that will now become Boeing’s home base only increased that competition for tech workers. Amazon is expected to bring tens of thousands of jobs. Virginia Tech is building an “Innovation Campus” in the neighborhood as well.

“Focusing our R&D and talent development in areas that support digital innovation will fuel the introduction of cutting-edge capabilities,” said Greg Hyslop, Boeing’s chief engineer and executive vice president of engineering, test, and technology. “This new hub in Northern Virginia will follow the successful implementation of this technology strategy in other regions.”

Boeing’s decision reminds me of a conversation I had with former SAIC CEO Tony Moraco in early 2019 about attracting engineers to Northern Virginia, not too long after that Amazon decision.

He noted how some workers were co-located near military bases they supported, at the request of the military. But he also talked about how the company, in 2017, opened an Cookeville, Tennessee-based “innovation gateway” to “build a pipeline of talent, and a lower cost area.”

Ironically, Moraco talked about a then-new openness to remote work, something that the pandemic has made a reality for millions of workers.

Flashback: In 2016 we reported on Boeing’s decision to move its defense business from St. Louis to its then-new offices across the highway from the Pentagon.

While the Boeing headquarters exit from Chicago drew the headlines this week, BAE Systems announced the opening of a new Manchester, New Hampshire, facility that “provides additional capacity to support the design and development of electronic warfare systems for the United States and its allies.” Last week, Leidos announced a new San Diego Campus Point facility

One final point on Boeing: The company on May 2 was awarded a $16 million Pentagon deal to conduct “E-3 Replacement Studies and Analysis.” Recall the Air Force really, really wants to retire the E-3 AWACS fleet. Last week, the Air Force said it would replace the E-3 with the newer E-7 Wedgetail, which is flown by Australia’s air force and other U.S. allies.

Staying down under, Australia awarded defense startup Anduril a $100 million contract to develop three extra large autonomous undersea vehicles. “It is modular, customizable, and can be optimized with a variety of payloads for a wide range of military and non-military missions such as advanced intelligence, infrastructure inspection, surveillance, reconnaissance, and targeting,” the company said. “Anduril’s approach to development of the XL-AUV will deliver the vehicle at a fraction of the cost of existing undersea capabilities in radically lower timeframes.” It’s the latest partnership between the U.S. and Australia following last year’s AUKUS pact between Australia, the United Kingdom, and the United States.

Todd Harrison, of the Center for Strategic and International Studies, announced he is leaving the think tank to become senior vice president and head of research at Meta Aerospace.

More than a dozen members of the House Armed Services Committee asked appropriators to bring the Pentagon’s 2023 spending proposal up to INDOPACOM’s request.

There are plenty of perennial problems draining the military’s coffers that need attention.

New directive orders the government to work with industry on security that can stand up to tomorrow’s quantum-powered decryption tools.

Legal ambiguity may have crippled DHS’s new board from the start.

The Seattle-based tech giant will get access to Naval Postgraduate School facilities and the chance to negotiate exclusive rights for technology it helps develop there.

The service is working to stand up a risk management council in the coming month.

“I fully believe that logistics has been an Achilles heel for the Russians,” Army Secretary Wormuth said.