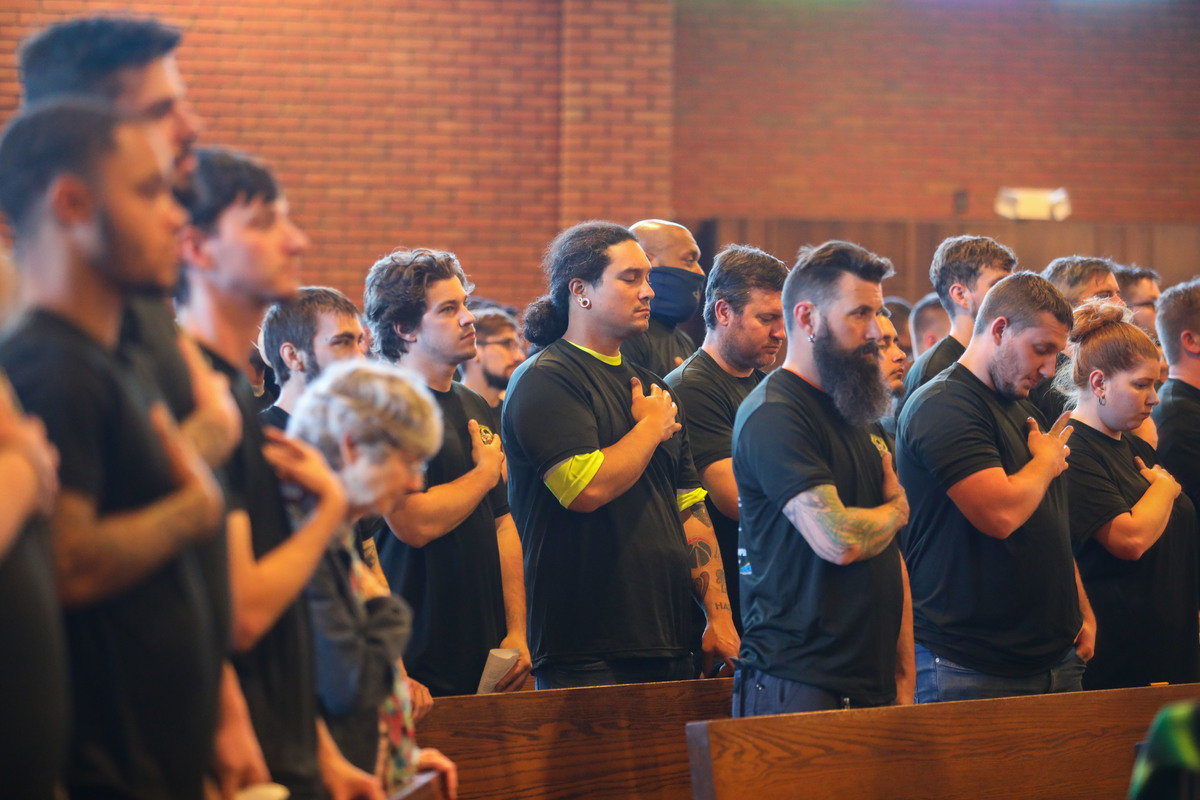 As he processed to the altar, Washington Cardinal Wilton Gregory wore a white hard hat instead of a bishop’s miter for the second annual Building Trades’ Workers Memorial Day Mass on April 26, 2022 at St. Camillus Church in Silver Spring, Maryland. The parish’s pastor who organized the Mass, Franciscan Father Brian Jordan, also wore a hard hat as he walked to the altar.

Moments later after taking off that hat, the cardinal solemnly walked past and incensed 20 similar hard hats placed in chairs in a semi-circle in front of the sanctuary, with a red rose placed beside each one. Nineteen of the hats had the name of a construction worker who died on the job site in the past year in Washington, Maryland and Virginia, with the 20th seat bearing a white hard hat to represent the 261 construction workers who died of COVID-19 this past year.

“Our prayer is for their peace with Christ and in gratitude for the works of their hands,” said Cardinal Gregory in his homily.

As the cardinal spoke, he had a backdrop of six banners representing the Baltimore-D.C. Building Trades Council and local unions for steamfitters, plumbers and gasfitters, sheet metal workers, electrical workers and painters and allied trades that were placed along the church walls.

The Memorial Mass for construction workers was held as part of International Workers Memorial Day held on April 28 each year, and it drew hundreds of men and women who are part of local building trade unions.

After the responsorial psalm that included the refrain, “The Lord gives success to the work of our hands,” and then the reading of the gospel, Washington’s archbishop in his homily noted they had come that afternoon to prayerfully remember those workers out of a shared belief in the dignity of human work.

“Today we gather to remember all those construction workers who have died during the course of their labors. We remember the families of those workers who continue to grieve their passing. We also remember those who have been seriously injured or whose deaths may be attributed to the pandemic,” Cardinal Gregory said. “We do so during this Memorial Mass and in gratitude for their labors that have enriched our world and completed many construction projects, improved our communities, and above all cared for their families and their loved ones.”

The cardinal noted that Jesus spoke to a variety of working people, including fishermen, teachers, lawyers, judges, tax collectors, tent makers and carpenters.

Those workers whom Jesus spoke to were also husbands and wives, fathers and mothers, sons and daughters, neighbors and benefactors for their communities, the cardinal added.

Cardinal Gregory said that on that day as they remember and pray for construction workers who have died, it is important also to remember how Jesus called workers in his time, and calls workers today, “to greatness, to generosity of spirit, to the very kingdom of God.”

After the homily, intentions were read by Tom Clark, the political director for the International Brotherhood of Electrical Workers (IBEW) Local 26 and a member of St. Philip Neri Catholic Church in Linthicum Heights, Maryland.

In addition to offering prayers for construction workers who died in the workplace, for their family members and friends and for those injured or made ill on the job, Clark also offered a prayer that all those in the construction industry, including workers, contractors, owners, developers, safety personnel and related government workers “may work together with our God-given talents to serve the construction industry in the District, Maryland and Virginia.”

Then Father Jordan asked people to stand for “a sacred moment, now in remembrance, the reading of the names of our 19 brothers who have died since April 28, 2021.” The priest noted that 13 of the 19 men who died were Latinos, and all 19 who died at job sites were non-union workers.

“That has been a constant statistic for many, many years here in the United States, the use and abuse of our Latino brothers and sisters,” the priest said.

St. Camillus’s pastor asked people to place their hands over their hearts. Juan Sotelo, an electrician with IBEW Local 26 who attends Mass at St. Matthias the Apostle Church in Lanham, Maryland, read the names of the 19 construction workers who died on the job, and a large bell outside the church tolled as each man’s name was read. Then Sotelo remembered the names represented by the white hard hat and red rose on the 20th chair in front of the altar, “all the brothers and sisters in the construction industry who have died from COVID-19.”

After Communion, the human face of that loss could be seen, when Father Jordan stood up and invited a woman to join him. “This is the wife of one of our parishioners who died in February of this year,” he said, remembering Hermenegildo Avizurez Chajon, a St. Camillus parishioner who died at a work site in Baltimore on Feb. 21. That man’s wife Lodia stood with the priest, who spoke to her in Spanish, offering the community’s prayerful support.

Then the priest welcomed Leah Ford, the chief of staff for OSHA, the Occupational Safety and Health Administration in the U.S. Department of Labor. Ford said she brought greetings from U.S. Secretary of Labor Martin Walsh, who was a construction worker and member of Laborers Local 223 in Boston and led the Building and Construction Trades Council there and served as the mayor of Boston.

Ford said that every week, OSHA sends out condolence letters to families of people who lost their lives at work. She said concern for workers and fallen workers “fuels our mission.. of keeping workers safe at work.”

In closing remarks at the Mass, Father Jordan said that when people ask him why unions are needed anymore, he points out that without unions, workers wouldn’t have things like 40-hour work weeks, collective bargaining, pensions and health care benefits.

He noted that Sunday May 1 marks the 20th anniversary of the death of Msgr. George Higgins, a noted labor priest from Chicago. Cardinal Gregory will celebrate a Memorial Mass for Msgr. Higgins on that day at 11 a.m. at St. Matthew’s Cathedral in Washington, and the following day, the AFL-CIO and Catholic Labor Network will be holding a panel discussion to remember that priest’s life and legacy.

“He (Msgr. Higgins) was the one who influenced me to become a labor priest,” said Father Jordan, noting that he was a Franciscan seminarian when he met Msgr. Higgins. “I recall his wonderful example. Part of my mission here is to help rejuvenate and revitalize the link between the Catholic Church and labor.”

Father Jordan said he wanted to build bridges between the Church and labor, just as Msgr. Higgins did for many years.

The priest thanked Cardinal Gregory for celebrating the Mass, and the congregation applauded the cardinal for being with them.

Addressing the workers gathered there, Father Jordan said, “The Church has not forgotten you and please don’t forget us.”