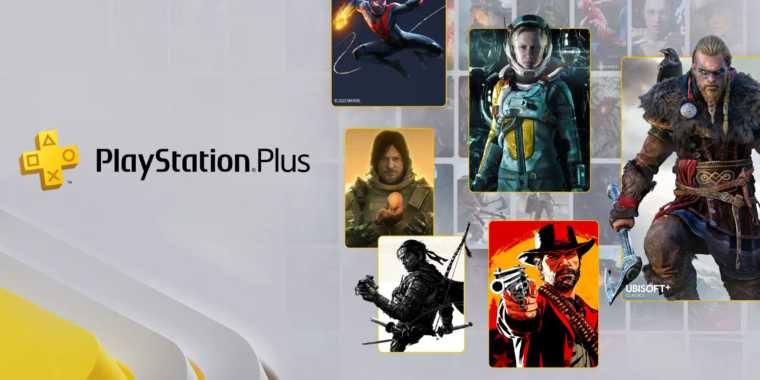 Starting next week, the PlayStation Plus subscription service will relaunch exclusively in Asia across PlayStation and PC platforms, with other regions’ relaunches to follow throughout June. With such little time to go, Sony has decided to finally begin revealing its launch game selection across a new series of subscription tiers.

But Sony’s Monday announcement falls well short of advertising we’ve previously seen. We now know that 119 games are coming to three PlayStation Plus “collections,” and they will be available in the service’s $15/month “Premium” tier (with fewer games in the $10/month “Extra” tier). That number comes nowhere close to the “up to 740 games” count across six generations of PlayStation systems that Sony previously suggested would be coming.

Sony representatives did not immediately answer questions about whether this availability gap will narrow once the service rolls out. For now, we’re left with the announcement’s tease that more games may appear between now and next week, as Sony is calling this initial 119-strong list “some of the games” coming to the refreshed PlayStation Plus library.

Sony has opted to combine its existing PlayStation Plus and PlayStation Now services into one catch-all subscription family, arguably to face off more directly with its competition at Xbox Game Pass. Historically, PlayStation Plus enabled online multiplayer on PlayStation consoles and added monthly game giveaways, while PlayStation Now opened up a mix of downloadable and cloud-streamed game access.

Now, you’ll get all of that stuff from the “PlayStation Plus” subscription family—but it’s a bit more confusing and less à la carte. For the $10/month “PS+ Essential” tier, subscribers get what was previously known as PlayStation Plus: online multiplayer access and a few free video game giveaways every month. The next tier up, at $15/month (“PS+ Extra”), includes the base tier’s features and adds a selection of “modern” downloadable games from PS4 and PS5 (dubbed “Game Collection”). Jump higher still to $18/month (“PS+ Premium”) for all the previous stuff, plus games from every other PlayStation generation, which are either downloadable (Classic Collection) or streamed from Sony’s servers (Game Streaming).

So if you only want to stream classic PS3 games from a server (since Sony still hasn’t figured out how to do PS3 emulation on PS5 hardware), you have to buy into the highest tier. Sony reminds interested subscribers that they can save money by subscribing for longer-term periods, either quarterly or annually.

Today’s news includes a pair of previously unannounced perks. Time-limited game trials will allow Internet-connected users in the Premium tier to download and freely play newer games that are not part of PS Plus—until an on-screen timer counts down to zero. Only six games will support this at launch, though reports in the wild suggest that more new games may get a similar trial option in the months to come. Sony’s announcement estimates “two hours” per game before players are nudged to buy the full game, though this number can vary; we’ve already seen Cyberpunk 2077 get its own time-limited game trial earlier this year, which gave players five hours of in-game time to experiment before deciding whether they wanted to buy.

Additionally, the Extra tier and above will come with a selection called “Ubisoft+ Classics.” This is basically a formal way of indicating that Ubisoft is committing a large-but-incomplete number of its back-catalog games to PlayStation Plus for the foreseeable future. Yet it also serves as a curious reminder that a thing called “Ubisoft+” exists on competing services, including Amazon Luna and Ubisoft’s own PC client, and that it offers more Ubisoft games, and more of those games’ DLC perks, outside of PlayStation Plus.